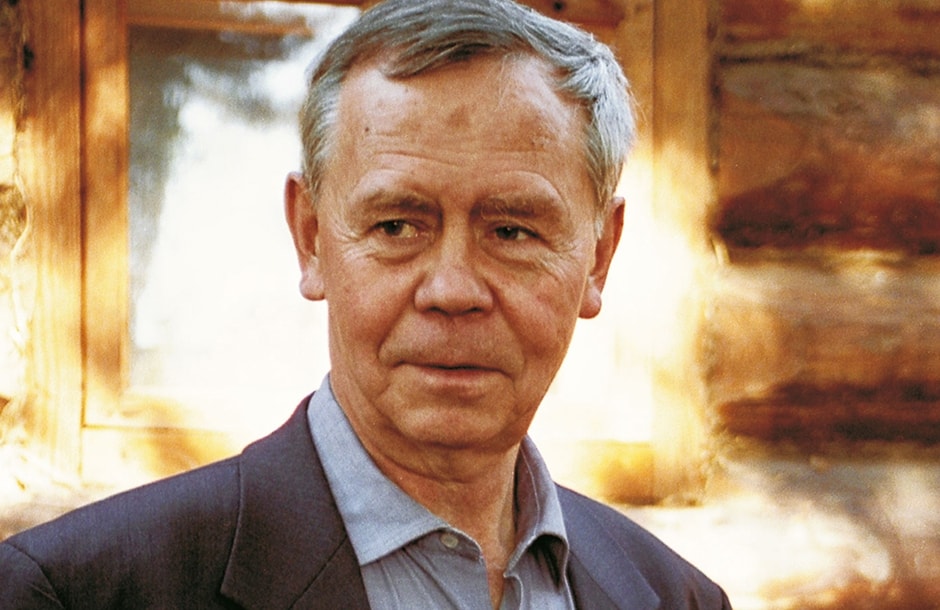 Valentin Rasputin is the only classic Siberian author still with us and yet we hardly ever hear his voice. I travelled to Irkutsk to meet him and to learn the reason for his reclusion, for in the seventeen years that have passed since the appearance of his novel “Fire” only the occasional short story has reminded us of his existence. But there was something else I wanted to talk to him about too, something more important...

I was haunted by a conversation I had with Viktor Astafiev whilst he was still in hospital. Astafiev knew he did not have long to live so I was careful not to bring up any of the "painful" topics of conversation, especially his estrangement with Valentin Rasputin. Differences in political views had placed an insurmountable barrier between them making the two great writers enemies after many years of spiritual affinity.

I wanted to meet with Rasputin in Irkutsk to share Astafiev's last words with him, to get it off my chest.

“What is there to talk about?! Whatever for?! No-one is interested anymore!”, Rasputin's voice cut categorically down the phone. “I have been in journalism for more than twenty years and nothing has changed. And anyway, I do not have time. I leave for my native land tomorrow.” It took some doing but in the end we managed to agree to meet the following day but only on the unwavering condition that the entire conversation “would take no more than fifteen minutes”.

I spent the unplanned free time walking around the old part of Irkutsk talking to some of the towns people about Rasputin. Of twenty people, fourteen knew who I was talking about and I did not hear a single negative word about Rasputin from any of them. The independent artist, Alexander Chegodaev, concluded the series of encounters with an interesting comment. Lamenting that in the distant past Rasputin had refused to pose for a portrait painting, he assuredly asserts: “He will still go down in history as a great writer, even if he never writes another word”. People will be reading “Farewell to Matyora”, “The Last Break”, and “Live And Remember” for many years to come.

I realized that the meagre quarter of an hour allocated for our conversation was nothing if I wanted to understand the real Rasputin. I would have to travel with him to the distant region of Ust'-Uda, from whence he transitioned into adulthood.

I wanted to understand how a young man born in poverty, who "only knew apples from pictures," and the distant city from stories, had, as they used to say, become someone. Where he lived was so remote that he was the first from his home village of Atalanka to travel to the regional centre to receive a secondary education. It would have been more probable that he would simply have lost his way in life and no one would have judged him for it.

Rasputin greeted me with a wariness characteristic of the Angara people. When they meet someone new they first feel out their intentions and then either find a polite excuse to show you the door, or bestow the full extent of their hospitality upon you.

We discuss Siberia but an awkwardness sits between us like a nervous bird. I sense that one wrong word would be like a twig cracking underfoot sending the bird dashing for the blue sky of the open window. I decided not to reach for my dictaphone or even a notepad. At last though, we managed to harmonise the resonance of our souls' tuning forks. It was agreed. We would leave for Ust'-Uda together in the morning.

First notch ("notches" in Siberia are what they call cut tree marks used to mark events). We do not give Rasputin a lift. He walked to the bus carrying a heavy load of books. He always carries his burden himself, like a cross, not allowing anyone even among his closest entourage to play up to his fame.

“Valentin Grigorievich, I get the impression that you get by on strength of character, like Igrenya from “The Last Break”...”